It's hard to believe that Lucas is already five months old! I remember back to the days struggling to get him to take naps, but now he is just rolling over to his stomach and going to sleep most of the time! He is also quite the mover, already trying to pull up onto his knees. I typically find him at the other end of the crib in the morning. Perhaps he enjoys a change in scenery :-)

Besides rolling and moving, check what else we are up to including Lucas's current daily schedule...

Lucas is usually taking 4 naps per day. Occasionally he will take 3 if he naps long and the 3rd nap gets too close to bedtime. I find his evening disposition and bedtime routine is happier when he takes 4 naps, but his awake periods are lengthening as are his naps so I bet we are going to be transitioning to a daily 3-nap schedule later this month.

He breastfeeds only 6 times per day, but he had a recent weight of 18 pounds, 2 ounces so clearly he is getting plenty of milk! Plus he is so happy and sleeping so well, signs of a baby getting plenty to eat.

He's sleeping exclusively on his stomach now. The first few nights I was in there with my flashlight checking how his face was positioned at night. He was always fine, but it reassured me to check. 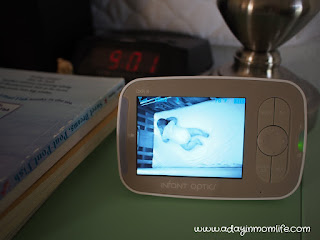 Lucas is napping effortlessly in his crib, which is great as long as we never leave the house! In the past month we have been out twice during his nap times and he has stubbornly refused to nap in either the baby carrier or his car seat. He ended up overtired and cranky.

Lucas does playtime in the exersaucer and under toy bars. He still enjoys his swing for short periods, it has a mobile which spins and he likes the music. He loves sitting up in the highchair and talking to my family when we are eating. He's also really started to focus more on books when I read to him. Henry loves books and I'm hopeful Lucas will too!

He's been chewing a lot on his hands but no sign of teeth yet! He likes the Butterfly Teether from the Honest company which I see is not sold as a single item currently :-( and also has Coco the monkey who is similar to Sophia and used to be exclusive to Target. I don't see it online but perhaps it's still in stores. My first son loved that little monkey. I like these type of teethers because they can just be washed up with dish soap.

I'm seeing some cradle cap on Lucas's scalp since he started sleeping on his stomach and is lying on different parts of his head. Mustela Foaming Shampoo for Newborns worked well for Henry and we are using it for Lucas. At this point the cradle cap is very mild, just some flakes so I'm going to try massaging his scalp more during washing. Here's an Overview of Cradle Cap. He's also had some skin issues. We are hoping he doesn't end up with chronic eczema like his father. I'm going to do a separate post on skin management.

Outside of some recent unexplained insomnia, I am doing pretty well! My weight is falling at a rate of around 2 pounds per month. My workout schedule of Monday-Thursday evenings is going well. I'd like to add in a weekend day but for the past month we really overbooked our family on the weekends which did not leave time for exercise.

I'm still attached to Lucas via the boob as I gave up much too early in my efforts to give more bottles. Lucas was not taking a bottle from the nanny and I just don't have time to bottle feed him (he will take one from me surprisingly) and pump during my workday. It's so much easier for me to just breast-feed him. Henry and I ventured out on a weekend play date recently but had to come back after two hours because Lucas would not take a bottle from my husband, sigh. I'm excited to start solid foods next month - expect a lot more baby food posts! I feel like I got all the kinks out while making Henry's baby food and am looking forward to fun meal times with Lucas!

I recently signed up on the website Motherly and they sent me a nice email of recommended reading for my 5-month old baby. Here's an example of their offerings: Helping Your Five-Month-Old Thrive: Tips and Activities.

Perhaps my largest issue which I only recently identified as we don't get out much...is the issue of going out with two kids. We attended a baby shower (coed) with baby and toddler in tow. Did we participate in games, nope! Did we see all the cute gifts, nope! We stayed for 40 minutes after Lucas's nap time but he desperately needed a nap and (as previously mentioned) would not sleep. I think if we ventured out more often we might be better at it. Inviting friends over is always the easiest. Lucas and Henry just go right down in their cribs at nap time and they have their seats to sit in and their toys. Plus my house is baby-proofed of course! At the shower, my toddler made a beeline for the desserts which were conveniently set out at his height on a coffee table :-) 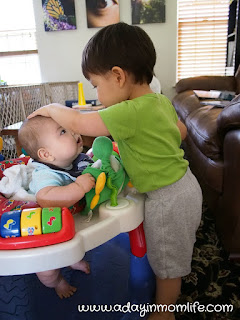 Henry is a pretty sweet big brother. He is really into getting Lucas toys now...but they have to be Lucas's toys. If Lucas drops his toy while in the highchair, Henry is all about getting it for him and giving it back to him. But... if we let Lucas play with Henry's OBall, he is not happy about it! Learning to share is going to be a process I'm sure. So far Henry has had limited exposure to the idea of sharing because he doesn't go to daycare. I've noticed on play dates that his friends who are in daycare are much more advanced with the concept. 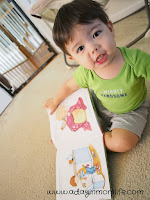 Henry is still into reading, reading, and more reading! He loves his books. Lately he has been all about finding things in his books. For example, he wants to pick out all the books with cats in them and then page through each one and find all the cats. This takes a while with 60+ books!

He loves this cookbook too, the pictures are great. He can find everything from the roast chicken to the bouillabaisse to the risotto to the tiramisu and he loves for us to quiz him. Have you ever heard a two-year old say "bouillabaisse?" It's pretty cute.

I swear he has more clothes! This green onesie is his favorite and because I do laundry at least twice a week, it is usually clean when he requests to wear it.

We are working diligently on table manners. Henry loves to spin things. This is something my husband started with him when he was around a year old, spinning rings, cups, etc. Henry likes to spin pretty much everything. I'm really impressed by this fine motor skill. However, it means he also tries to spin things he shouldn't...like his plate, his bowl, and his milk cup...

He is sitting up at the table in his booster now. I had been using a Silicone Baking Mat as a place mat when we ate out, so I tried it at home and it works great. I have one of these Skip Hop Toddler Place Mats too, but I find it does not stay in place well and I don't like the shiny/slippery texture of the mat. We received the Thomas and Friends Fork and Spoon Set as a gift and recently switched to it as Henry's first metal silverware. It's just the right size for a 2-year old. Henry may be ambidextrous (or perhaps still just learning) as he will use both his right and left hand for his fork and spoon.

I think Henry is definitely going to require an adjustment phase once Lucas starts crawling! He is not ready for Lucas to be all up in his stuff yet and we are busy researching toddler behaviors and behavior strategies.


If you have tips for dealing with a newly mobile baby and a two-year old, please pass them along!