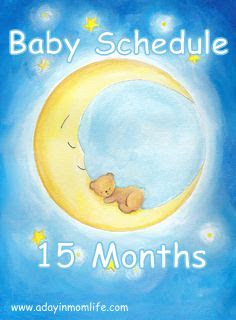 Here's what Henry is doing in a typical day:


The transition from two naps to one nap has been taking its sweet time. Henry's 1-Nap schedule is NOT the ideal 1-Nap schedule. The proper schedule would be to go down for the nap around noon - 1 p.m. after lunch. I tried shifting back that nap and giving Henry a snack around 10-10:30, but he was always falling asleep in his plate. He just wasn't ready to push back that morning nap. I finally settled on a few rules which keep him happy during the day and sleeping well overnight:

Henry was fully weaned as of a week after he turned 15 months. I quit the morning feeding back at 14 months, but kept up the bedtime feeding. I had initially planned on feeding longer, but I'm expecting my second child and as I hit second trimester I was definitely feeling I wanted to quit breastfeeding. Also, Henry has never requested (or demanded) to breastfeed, which made it easier to quit at this stage. In the morning, he gets up and plays with his dad for around 30 minutes before breakfast. At first, I was giving him a cup of cow's milk when he woke up, but he didn't seem to need it. He just waits for breakfast at the table. For bedtime, I had already for months been reading books after breastfeeding before putting him down to sleep. Now I offer him his water bottle before story-time and he takes a few sips, then we read, sing a song, and he goes to bed. I decided not to offer cow's milk at bedtime for 2 reasons: I've heard it is easier to potty train overnight if your toddler isn't drinking a few ounces right before bedtime and also cow's milk before bed has been linked to cavities. Henry is used to having his teeth brushed right after his meals as part of "cleaning up" and I don't want to change his tooth brushing schedule at this time.

A further note on cow's milk... Henry really prefers water to cow's milk if given a choice. To increase his milk intake, I only offer milk with meals. Otherwise, he will always request the water cup. He drinks a cup to a cup and a half of milk per day during his meals. He gets as much water as he wants from his water bottle throughout the day if he is thirsty.