Both my toddler and my baby are challenging me these days...

Allow me a moment off topic... Over the weekend I made some Veggie Tomato Sauce with butternut squash and onion. I browned some sausage and added it after pureeing the sauce. This is usually a fail-safe toddler meal for me. Yet, the first night my toddler only wanted to eat the sausage and the second night he only wanted to eat the noodles! What possible explanation could there be for that?!?!

So my toddler continues to be a toddler LOL... and on to the topic for this post!

My biggest challenge with my little one currently is managing the "witching hour." Fussiness sets in by 7 p.m. This is not an uncommon occurrence among babies, but every baby is different!

Read on for my experiences and tips...

My first baby was very consistent in his witching hour madness. From 2-3 months of age every evening at around 7:30 he would cry for 45 minutes to one hour. During that time he would not breast-feed. We kept him in his nursery while he fussed: rocking him, carrying him, singing to him, and occasionally putting him in his crib for a moments break. He would calm down and then would eat and settle in his crib around 9 p.m. When he awoke during the night, I was able to feed him, change him, and put him back in his crib without any issues.

My second baby has been more of a challenge. He started fussy time after 7 p.m. at around a week old. This has been especially hard on me because my toddler needs his bath at 7:30 and bedtime at 8:00. I couldn't pick up my toddler (due to c-section) the first weeks so my husband took over toddler bath and bedtime duty and I really miss it! My son is such a sweet boy and I'm looking forward to getting back to participating in his bedtime. In the meantime, we've gone through several variations of witching hour madness with baby to date...

1. Initially I could placate him by cluster feeding in the evening. Eventually he would fall asleep on me and I would transfer him to the co-sleeper. He woke up every 2-3 hours overnight to feed. I was successful getting him back into the co-sleeper most of the time, but usually at least one feeding overnight I would have to get him back to sleep lying on me or he would sleep on my husband's chest.

2. As Lucas got older, he became more erratic about what he wanted and fussy time extended. For a few weeks what worked best was that I would feed him until he didn't want to eat anymore. Then I would go to sleep, this was usually around 9 p.m. and my husband would walk him around in the Baby Bjorn carrier. Usually my husband was able to transfer Lucas to the rock n' play where he would sleep until midnight or even one a.m. and during that time my husband would also nap nearby on the couch. This allowed me to get some sleep and my husband can sleep anywhere and is a prince among men :-) When Lucas woke up, my husband would bring him up to me and I would feed him and he would go back to sleep. He would wake up for additional feedings overnight but typically settled back without issues. 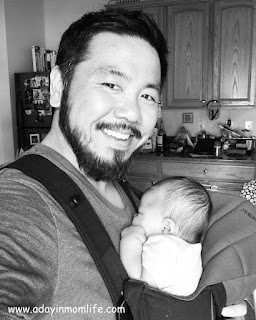 3. Our current mode developed because Lucas was crying and not settling even after being fed and while being walked around in the carrier. Now, I try to arrange for his bedtime feeding to be around 7:30 p.m. This is easy as it never fails that he is awake and wanting to be fed at our 5:30 family dinner time! We give him a bath every other night at 7:00. If he doesn't get a bath and is fussy at 7, I try to keep him happy but if necessary just start feeding early. His nursery has a bed in it as it also serves as our guest room. I change him and then do side-lying breast-feeding. I've found this much more effective then nursing in the rocking chair at putting baby to sleep. He typically eats both sides (and sometimes a third side, which is back to the first side again) with a little fussing before falling asleep. I cuddle with him for 15-20 minutes more before transferring him to his crib. I've been bundling him with arms down in his crib as he seems to be sleeping better that way. He will sleep until 12-1:30 before waking for his first night time feeding. He always eats well at that first night feeding and goes back to sleep.

Breast-feed - this is always my first-line strategy, cluster-feeding in the evening is very common

Take a bath - baby usually calms down in the warm water


Catch a nap in a carrier - if you are lucky you can transfer baby to crib or other sleeping spot but if not, a short nap will also sometimes "reset" baby's mood

Ear plugs or noise cancelling headphones - I have audio evidence that my second baby screams much louder than my first did. Nothing will completely block out baby's cries, if you have sensitive ears don't feel bad for cutting the noise down a level. 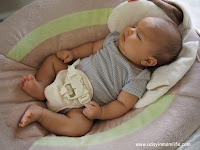 
Pacifier - if baby is well-established with breast-feeding (i.e. latching without difficulty every time) a pacifier can be introduced, we like the Avent Soothie ones.

Share the load - if you are feeling frustrated which is highly likely, hand off baby or just put baby down for five minutes in a safe place. Take some deep, calming breaths and remember how sweet baby can be...


Be flexible - baby may act the same every night or may want to mix things up for you! It's hard to change once something is working, but it may be necessary to try something new if baby isn't responding anymore.

And finally, remember that witching hour madness is only SHORT TERM and baby will grow out of this stage!