Napping in the Crib

With my first son I did not sleep train/nap in the crib until 4 months. I remember going back to work after maternity leave. Since I work from home, I was feeding him to sleep a lot...then I'd try to sneak him into the swing or rock 'n play where he would sleep for either 20 minutes or 2 hours. There was absolutely no predictability to what he would do. If he seemed hungry and it had been over 1 1/2 hours, I would feed him. He was sleeping in his crib overnight pretty well, but napping could be a challenge. See my post about Nap Training my first son at four months for more info.

Well, I felt pretty firm when I had my second son that I would not try to sleep train until at least four months. Enter life with a baby and a toddler under the age of 2!!! I've been stressed about starting back to work in a few weeks! Neither I nor the nanny will be able to constantly carry around Lucas to lull him into naps.

Lucas has been sleeping well in his crib overnight (after he finally goes to sleep). So I thought the most practical thing would be for him to go to sleep and nap in his crib.

To successfully go to sleep in the crib, baby needs to be at that ideal stage of very tired but not overtired. I started more strictly following the eat, play, sleep schedule. I also keep a close eye on the clock and on the baby with average max awake time (Chart Here) in mind.

At eleven weeks old, Lucas is staying up for around 1 hour 15 minutes between naps.

Here is an example of a daily schedule:

I use the term "schedule" very loosely here. A 2-3 month old should never be restricted to eat and sleep on a strict schedule. All times depend on when Lucas wakes up from his naps. He may nap anywhere from 30 minutes to 2 hours, with the average nap around 45 minutes. The next nap will be 1 to 1 hour 15 minutes after waking up. The 7:30 bedtime is hit or miss these days (mostly a miss) as we are still experiencing some Witching Hour Madness. However, this is improving and I'm feeding him in the rocking chair in the nursery like I normally do and then rocking to try to get him to settle down in his crib.

How I have set up my Eat, Play, Sleep Routine -

Eat - Instead of feeding all over the house, I'm only feeding in the nursery. Ideally, I feed him when he first wakes up from his nap. If the nap is too short and he is not hungry, I'll wait 30 minutes and then try again. My toddler doesn't seem to mind this when I am watching them both. He will either play in his own room, or wander around Lucas's nursery, or bring in books for us to read together in Lucas's nursery.

Play - Lucas loves to be talked to, hang out under a toy bar, do tummy time, and sing. Really, anytime I sing he will sing with me! My first son didn't do this and wow is it cute! We rotate between activities as he gets bored. As play time winds down towards sleep time, he prefers to be held.

Sleep - When he is yawning and showing signs of crankiness, I spend a few minutes with Lucas in his nursery before putting him down for his nap. He gets a fresh diaper and I turn a white noise machine on low (we like the Marpac Dohm). I sing a few songs while walking around with him. Then he goes in the crib. I've tried both swaddling and not and had more success with swaddling. I wrap his arms down with a swaddle blanket but leave the bottom of the blanket open to allow full leg movement. I give him a pacifier and wait until he is actively sucking, then I stroke down his head and forehead a few times saying "Hush..." Once his eyes are drifting closed, I leave the room.

Successes and Set-backs to Date...

After a week and a half, Lucas goes to sleep with my routine around 75% of the time. If he does not go to sleep after I leave his room the first time, I go back in and offer the pacifier again (he has always spit it out if he has started to fuss). If he won't take the pacifier, I leave him for 2-3 minutes and then offer it again. Especially at the beginning, we had the occasional time where I spent 30 minutes going back in and giving him back the pacifier and he finally feel asleep to take only a 20 minute nap. But that is happening rarely now. I've even had a few times where he wouldn't take the pacifier upon being first put down and he just fell asleep without it.

Using a pacifier is, in my opinion, the easiest way to sleep train to a crib. You place the baby in the crib awake, give the pacifier, and after they fall asleep it drops from their mouth. Using a pacifier has allowed me to train my sons to fall asleep in a crib without crying. My older son preferred his thumb and stopped taking the pacifier, he still sucks it at bedtime as he is approaching his second birthday. I'm hopeful Lucas may not suck his thumb!

I prefer to use a thin swaddling blanket because baby's legs can be completely free and baby can free their arms if they are motivated. My son will often work his arms free at some point after he initially falls asleep. Swaddling wraps with velcro are much harder for baby to work their way out of. I stopped swaddling my first son when he was around 3 months old which was well before he was able to roll over on his own from back to front. Swaddled babies should always be placed on their backs on a firm mattress. There are differing opinions on the safety of swaddling and I encourage you to read up on the topic and make your own decision.

Here's how I swaddle: 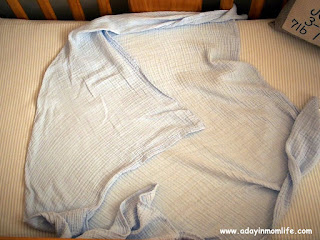 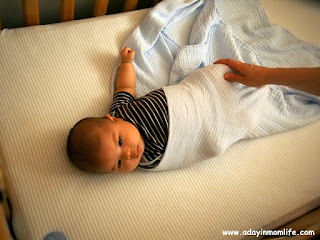 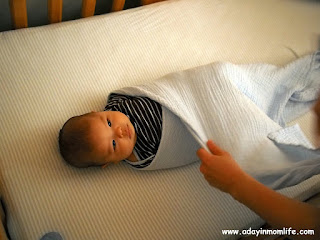 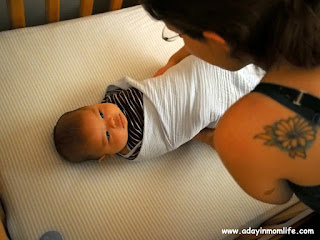 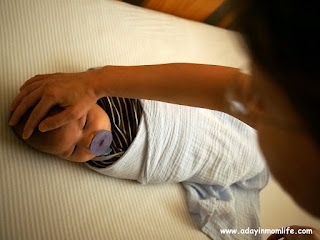 I worked night shifts in the hospital so I'm no stranger to white noise machines. I used one personally for years while sleeping during the day. The primary thing I considered when using white noise for my children was if the machine was harmful to the their hearing (too loud.) There are mixed thoughts on this. An app on your phone or tablet can tell you the decibel level. Simply turn on the machine and use the app to check the decibel level at the crib's location. If the machine is still too loud when placed on the opposite side of the room, consider placing it in the closet. Machines such as the Marpac which use a fan cannot be covered because they will overheat, but an electronic speaker device could be covered with a towel or blanket to dampen the sound. In my own opinion, I think it's beneficial to have quiet time for ears to rest while sleeping. I use the white noise machine during naps but not during overnight sleep. I'm currently using the machine for initial bedtime, but then I turn it off during Lucas's first overnight feeding. My toddler goes to sleep at bedtime without a noise machine. During times like vacation or when there is company in the house or on anticipated noisy nights (July 4th fireworks), I'll use the machine overnight.

I return to work next week and am feeling pretty good!